A huge thank you to LA's the Place Magazine for including Shannon Howard Photography as one of the featured artists  in their coverage of the Artisan Group®'s exhibit at the 2015 Golden Globes Celebrity Gift Lounge hosted by GBK Productions. The lounge was held in honor of the nominees and presenters of the Golden Globe Awards.

( Photo, article, and caption pictured above right from lastheplace.com: Actor and comedy legend Cheech Marin from The Book of Days and comedy duo Cheech and Chong with "Vibrant Shore" by Shannon Howard Photography.) 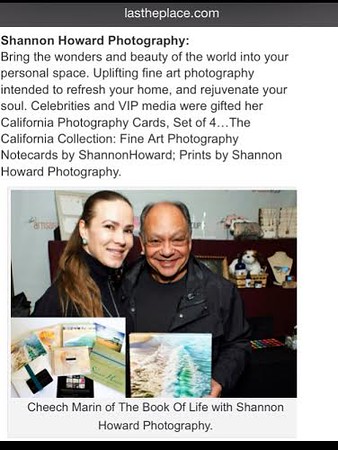 Thank you to Sue Facter (@theFacter), Greer's OC (@greerwylder), and Danielle Datu (@danielledatu) for the tweets, instagrams, and mentions for Shannon Howard Photography (@SHowardPhotos) and The Artisan Group(@theartisangroup).  Also, a huge thanks to all of the celebrities, press, and media who visited TAG's exhibit at GBK's Primetime Pre-Emmys Celebrity Gift Lounge!

Check out one of our mentions and learn more about GBK's Emmys Celebrity Gift Suite by clicking on the link below:

Shannon Howard Photography, in association with The Artisan Group, will be participating once again in GBK's Primetime Emmy Awards Celebrity Luxury Gift Lounge on August 23-24, 2014. This invitation only event will be held at an exclusive location in Beverly Hills, California, in honor of the 2014 Primetime Emmys Nominees and Presenters. Ten different photographs will be included in this year's gifting event. Many thanks to The Artisan Group for this opportunity!

Summer is here and a unique, easy-breezy beach tote is an essential for the season! Check out our stylish "Memories of Seal Beach" fine art photography beach tote featured on the "Good Stuff" page of Bust Magazine's June/July 2014 Issue. (Available at etsy.com/shop/ShannonHowardPrints ) Also, please visit bustmagazine.com to learn more about this smart, saavy women's magazine!